Gathering of the Vibes Wrap uP 2011 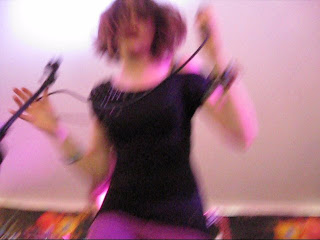 by Lauren Traub Teton for Twifties.TV

The only “givens” that I’ve found at GOTV are that every day, unexpected and wonderful things will happen, and every year, at the end of Vibes, I say “THAT was the best year EVER! This year is no exception as the 16th annual Gathering of the Vibes happened at Seaside Park and for miles around it, in Bridgeport, CT.
Changes of note for the 2011 version were: the fantabulous addition of the 85 foot high Ferris Wheel, managed by George Marrena of Marrena Amusement. Its colors lent an ever changing psychedelic signature to the skyline over the water, and brought glee to many, as riders and viewers. This year there was no golf cart taxi service, in past years a boon to tired fest-goers who needed to get to the campground way over in West Beach, a mile or more away from the main area and the site of Friday and Saturday Silent Disco on the beach from 1 am to 4 am.
WPKN supplied the invaluable service of piping in the music through listener's radios, a godsend to be able to hear some of the show sitting in a shady campsite instead of a baking field or even at home through waves or web.
Dark Star Orchestra gave their ALL in the Friday night main show, sweaty as it was. They played an elective set, that means it was not one of their usual copies of a Dead show, and they put everything they had into it. The late show at the Green Vibes stage by Big Gigantic had the crowd going WILD on the dance floor and was shall we say, not a way to wind down before bedtime, hee hee.
On Saturday, moe played a 30 minute groovy jam of “Rebubula, So Long, Rebubula” with dancing parts and resting parts toward the end. Inflated  pandas and beach balls flew through the air as the sun set slowly. Jane’s Addiction hinted at the showtime extravaganza that was to come – it was the only act that had a curtain drawn, and as the band broke into “Whores” the black curtain unfurled from the top down and exposed the 10-ring circus from the mind of Perry Farrell including black plastic clad women girls flailing on rope from the ceiling in time to the music (one is Etty Lau Farrell, Perry's wife and mother of their 2 kids) and 30-foot cheesecake posters of discretely naked women.


All of that almost paled in comparison to watching the magnetic man himself. Perry’s moves on stage will make anyone seem like a good photographer, because he knows exactly what to do. A swee-eet moment was when a giant beach ball landed at him onstage, and he flipped the mini-fridge sized ball onto his finger tip and gave it a spin, easy as a 20-year Harlem Globetrotter. Many people we spoke to tired of his glorification of alcohol and steady requests to deliver joints to the stage, but…whatever. The darkness is part of their schtick. The show ran hot and cold IMHO, with “Caught Stealing” and “Jane” highpoints to the less fervid fans of the group.
Perpetual Groove’s late night show at the Green Vibes stage was not what I was expecting. I remember seeing them somewhere, maybe at Vibes, and it was a dance party. Saturday night less so. The Silent Disco went on til 4 a.m. down at West Beach, a long walk from the Ferris Wheel. The disco was right on the beach, in the dark, with headphones and music supplied. People grooved to the outwardly silent tunes playing in and around their heads on the sandance floor, but no music was audible!

Sunday, a mini rain shower happened simultaneously with the sun shining. Ken Hays, whatever strings you pulled on that one, Bravo! We were there for the serious lightning storm 2 years ago during Moe that shut the show down, and up at Mariahville the night Ratdog’s music, and thunder and pouring rain competed in Mother Nature’s Superbowl Stadium. This is the first Vibes we can remember in 6 years that remained dry, though it was a bit toasty all week.
Sunday surprised on other fronts. The “wind down” afternoon shows were actually uppers. School of Rock All Stars in the new School of Rock tent, neatly by the kid’s area, had some of the finest and certainly the freshest, youngest new talent we saw all week. When the tempos went into instant overdrive on the 2 cover songs we filmed, and the audience started moshing, we had to COLWG …that’s chuckle out loud with glee! See the performance and interview with one of our favorite School of Rock bands from Sunday here.
Roving back over to catch the end of the John Butler Trio, the thinning and comfortably-sized audience was engaged in some serious dance action, and we’ve got the ecstatic looking dancer’s on film for you. It was nice to be around the very happy vibe the band created. And what a good looking crowd it was too!

Once again, this mammoth music festival, that started from a small party year’s ago, has prevailed. It was…the bestVibes ever!  Party on Garth!

Find more music festivals on MusicFestCalendar.com!
Posted by Lauren Traub Teton at 12:28 AM