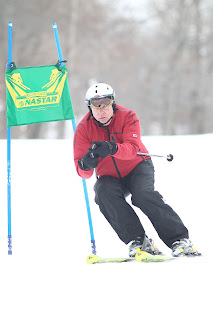 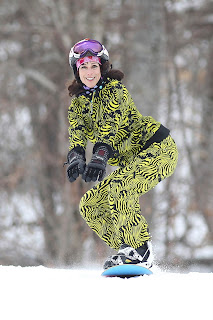 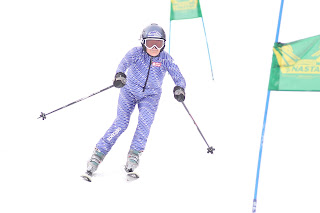 NEWS RELEASE
March 8, 2011
CONTACT: Lauren Traub Teton, (914) 764-0115; lauren@snowboardsecrets.com
Photos above of Rolph Erdman, Lauren Traub Teton (in yellow) and Nancy Howe, by George Skovera.
Twifties Winter Games Attracts Ski Racers
to Wachusett Mountain
Event Highlights Active Lifestyle Among Baby Boomers
Fifty skiers and snowboarders over the age of 50 converged on Wachusett Mountain for the Twifties Winter Games, March 2, to show the world that the Baby Boomer generation can and does follow an active, fun-filled lifestyle.
Video of the Twifties Winter Games 2011 at Wachusett Mountain and last year's Twifties Winter Games at Ski Sundown in CT are at Twifties.TV:
“Typically we’ve seen 25 to 30 participants in the Senior Winter Games,” said Carl Fetteroll, games coordinator, Massachusetts Senior Games. “This year we had 50. Two things are different. This is the first time we’ve had a title sponsor, Twifties, and we’ve settled on an early March date for the event.”
“We were thrilled with the turnout this year, double what we expected from last year,” said Teton. Having Twifties as a title sponsor gave the event more credence and helped get the word out to a larger audience, she said.
The Massachusetts Senior Winter Games have taken place at Wachusett Mountain, Princeton, MA, for 18 years usually in January or February. This year the event was scheduled for the first Wednesday in March, a date the games will hold for years to come.
Twifty is a word to describe the active subset of Baby Boomers who continue to carry out an active lifestyle, according to Twifties founder and advocate Lauren Traub Teton, herself an accomplished snowboarder, snowsports journalist, and videographer.
Massachusetts Senior Games is a volunteer organization with Blue Cross Blue Shield of Massachusetts as its presenting sponsor. The group provides competitions in 30 different sports for men and women over the age of 50. Massachusetts Senior Games is based at Springfield College where Fetteroll teaches math.
The skiers and snowboarders participated in the day’s two races run on Wachusett’s NASTAR course. Twifties and Wachusett Mountain supplied participants with discounted lunch vouchers.
“Ski and snowboard racers are a special breed of Super Twifties,” said Teton. “They head out each winter week in the darkness and ice to compete in their race leagues. I see now, they're hooked! I felt that feeling on the Super G course myself at the Twifties Winter Games.”
Of the 50 racers at the Twifties Winter Games, six were over 80, 10 in the 70 to 79 category, 18 were 60 to 69 and 16 in the 50 to 59 age bracket.
No one had a better time on the slopes of Wachusett than Nancy Howe, who at 82 was the eldest woman racing in the Twifties Senior Games.
“I live in Rutland, right next door, so Wachusett is my home mountain,” said Howe. This season, she skied every day from when Wachusett opened on Nov. 28 through the end of January. “Then the knees began bothering me, so now I’m only racing two nights a week.”
She returned to skiing when she was 77 because she found she had idle time and wanted to keep fit in the winter. The transition to ski racing came quickly. “Skiing was getting boring,” said Howe, who as a young woman raced with Andrea Mead Lawrence, a three-time Olympic skier who won two gold medals in the 1952 Olympics.
“This is fun,” said Sandy Bell, of Sudbury, MA, as she waited near the starting gate for her turn to race. “It’s nice to see people at 82 out here. She’s really an inspiration. Twifties is a great idea. It addresses an area that is neglected.”
Also waiting for her race number to be called was Edith McNamara, of Sterling, MA, a friend of Bell’s. “This is great. Twifties is a great concept. Why not have something for us?”
Twifties Winter Games stories and photos can be found at http://twifties.blogspot.com/2011/02/twifties-winter-games-at-wachusett-in.html and videos can be found at http://www.twifties.tv/videos.php?category_id=27.
According to Teton, Twifties are fun people around age 50 and up. The word Twifty is derived from “fifty is the new twenty. Twenty, Fifty, Twifty!” and was created by Teton, a professional product namer.
“The business world is starting to realize they had better design and market products for us,” said Teton, who cited a recent feature on CBSNews.com titled, “The new target demographic: Baby Boomers. As the Baby Boom generation ages, companies explore ways to attract some of their $3.4 trillion annual buying power.”
“But if they're targeting at the older end of the Boom, they are missing the boat because the younger end, Cohort #2 as it is sometimes called, is the biggest buying demographic in the U.S.,” said Teton.
Twifties are encouraged to register for the Twifties Party List and be notified of future events on www.Twifties.TV where they can also view short videos of Twifties having fun. Twifties.TV is on Facebook at http://www.facebook.com/pages/TwiftiesTV/191972385688.
--end--
Posted by Lauren Traub Teton at 1:37 PM